Powered by the U.S. Department of Energy

An important message about COVID-19 from the Lab Partnering Service

LPS enables rapid discovery of expertise and serves as a conduit between researchers, subject matter experts, investors and innovators by providing multi-faceted search capability across numerous technology areas and across the National Laboratories. Learn more about LPS.

This portal is meant to enable connection to U.S. Department of Energy (DOE) patents and experts, not to provide information about coronavirus or COVID-19. DO NOT contact the individuals and researchers included in LPS for general questions about COVID-19. For information about the virus, please visit the Centers for Disease Control (CDC) website.

Huge parabolic mirrors catching the sun's rays could crisscross America's deserts soon, thanks to a breakthrough that may greatly lower the cost of solar power.

A small solar company has teamed with scientists at the National Renewable Energy Laboratory to develop massive curved sheets of metal that have the potential to be 30 percent less expensive than today's best collectors of concentrated solar power.

The SkyTrough Parabolic Trough Solar Concentrating Collectors will be longer than football fields and look like fun-house mirrors, but could be the game-changers in solar energy's bid to out-muscle gas and coal in providing electricity for America's homes.

The breakthrough recently was honored by R&D Magazine as one of the top 100 technical innovations of the year, and by the Federal Laboratory Consortium with a 2009 Excellence in Technology Transfer Award.

Solar power has been nipping at the heels of fossil fuels for decades, but hasn't yet found a way to be cost-competitive on a large scale. 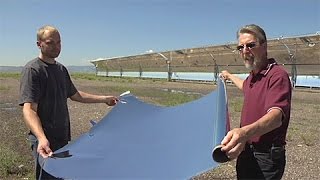 You can use keywords such as "Advanced Materials" to find experts who focus on this area of interest.

You may search for a specific lab to see all facilities, technologies and experts found there. e.g. "Ames National Laboratory"

You can use search for a specific technology to find all laboratories and experts who have expertise in this field. e.g. "Energy Analysis"

Fill out the information below to ask your energy technology question. Our target response time is 14 business days; however, any individual may not be available to meet this target though we strive to provide a timely response.

This is a free service. Learn more about this service.